Rebels of the Air & 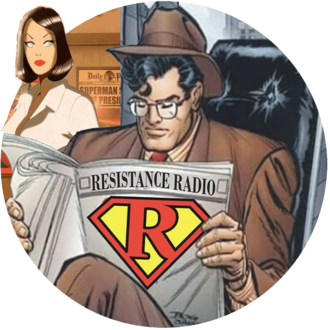 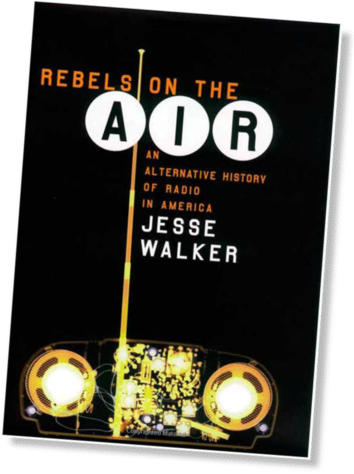 Far more common were projects like Excellent
Radio, operated from a storefront studio in downtown
Grover Beach, at the heart of California’s midstate
Five Cities Area. In many ways, the Grover Beach
station resembled San Marcos’s Kind Radio. It had
a lot of local supporters, including members of local
government. It covered local issues intensely,
including live broadcasts of city council meetings.
The rest of the schedule was as lively and diverse
as its talk shows, mixing musical genres with no
regard for commercial custom. It even shared
Kind’s roots in the marijuana subculture: the station’s
founder, Charley Goodman, owned a head
shop next door.

But just as every town is different, so is every
micro radio station. The Five Cities Area has a
long history of bohemian mysticism, dating back
to the days when the town of Halcyon was a
stronghold of Theosophy. For years, the dunes have drawn free spirits to the
region, and they’ve left a rich alternative culture behind, to lurk, sometimes invisibly, between

the strip malls and beach shops and expressways.

The avant-garde composer Henry Cowell lived there, not far from the Theosophists’Temple of The People.

So did Ella Young, a gun-running mystic from Ireland; and Gavin Arthur, astrologer and author and nephew of the twenty-firs president; and Meyer Baba, the guru; and John Cage, the composer. It was this other Grover Beach that conjured an illicit signal into the ether, a station where the region’s submerged voices could finally be heard, sometimes
speaking directly into the microphone, sometimes buzzing in the background. (When the broadcasters built their studio, they decided not to soundproof it, letting the ambiance of the street spill into the room and over the air.)

Over the years, Goodman had becomean amateur archivist, collecting and studying remnants of the bohemian lore. From this he developed a spiritual optimism that would suffuse his station.

Free Radio Berkeley served it fetal time as a PA system in People’s Park; Kind Radio grew from the “Hayes County Guardian”. Excellent Radio began as a art show and was inspired by two TV sets nestled in a Cambodian pagoda.

In 1995, some of Goodman’s friends performed an original opera, “The Father of Lies”. One of the props was the aforementioned pagoda; within it were two video screens, one displaying a moving mouth, the other a pair of eyes.

The contraption made Goodman think about television’s role in society. TV, he felt, kept people alienated from each other. We needed a different kind of media, he decided: media that would bring people together. Page 1 of 3

Goodman had already set aside part of his head shop as the Excellent Center for Art and Culture.
He had also heard stories about M’banna Kantako’s station in Springfield, Illinois. Low-power radio seemed the medium he’d been looking for, and it soon inspired a new exhibit for the Excellent Center’ “The Father of Lies vs. the Mother of Invention…humanity@risk”. The father of lies was TV; the mother of invention was microbroadcasting.

The more Goodman investigated the topic, the more convinced he became that Grover Beach needed a station like Kantako’s. “I’d thought I’d just do a pictorial show about this,” he recalls.
“Then I thought, Jesus Christ, if this guy with no money and no eyes can do this, what kind of pussy am I if I don’t do the same damn thing?” He already had some experience—he’d DJed for a decade at a nearby NPR outpost –and Stephen Dunifer lived only a few hours to the North.

The transmitter he ordered from Free Radio Berkeley didn’t work, but fortune soon intervened: while Goodman was waiting for Dunifer to repair his product, an engineer at the NPR station lent him on of its backup transmitters. Excellent Radio held its first broadcast almost immediately afterward.

The station matured quickly. Only two weeks after its debut, a storm knocked down all the regions radio towers---except Goodman’s. Charley monitored his scanner closely, passing along storm news and emergency announcements to his listeners. The NPR station soon asked for its backup transmitter back, quieting Excellent Radio until the repaired Dunifer kit arrived. But for a short time, it had been the only operation on the air. “It was a good example,” Goodman says, “of how quickly you could be important”.

Goodman asked the city council whether he could broadcast its meetings. After a few months, he got the go-ahead. The city attorney understood that the station had no license, but that, he felt,was a matter between it and the FCC. California’s open meetings act, on the other hand, guaranteed it the right to cover the council.

The station family continued to grow. Its volunteers ranged from skate punks to retirees, from. white hippies to Spanish-speaking cumbia DJs. There was an afternoon kids’ show Treasure Ivan, hosted by 60’s tunesmith Ivan Ulz, onetime composer for the Byrds, The Four Freshman and other ancient pop groups. There was a swing show, a ska show, and a weekly helping of “pure pop for now people.” One pair of programmers started interviewing the stars of the World Wrestling Federation.

And a sixtyish teacher-turned –Green named Annie Steele, already locally famous for fighting the pesticides she blamed for local illnesses, hosted an evening talk show called Pollutions---Solutions. Local officials used to revile Steele as a crank, and she’s the first to admit, they weren’t without good reason. I do my homework now,” she told the Santa Maria Times. “When I first started,

I didn’t know what the homework was.” Over the years, as she learned more and made moreallies, she graduated from crank to gadfly, and from gadfly to full fledged force. After she joined
Excellent Radio, her show became a local institution, the place where – for example – members of the Planning Department would come to talk with their constituents about the contamination of th nearby Nipomo Dunes.

Then there was Rudy, host of a tremendously popular Saturday-night reggae, rap, and R&B party, A Taste of Soul. Rudy was a former gangbanger who’d gone straight; his show had a big following among young people and, damn the stereotypes, among some of the local cops, who saw Rudy as a good influence. (Excellent Radio maintained cordial relations with the police, who faxed it the same press releases they sent to all the other local media. The station even had a retired highway patrolman on its staff.)

The federal cops, naturally, were a different matter. The station eventually received the inevitable letter from the FCC, based on a year -old complaint that it was interfering with the search-and-rescue radio service. The truth, Goodman later reported, turned out to be much more mundane:

We found it was about radio phones within this one block residential area where they are certainly not going to be doing much Search and Rescue. We might have broken into the communications of somebody’s mobile communicator or something. So, we sent back east for a particular filter that would take care of this and we went off the air after we did the last city council meeting to show that we were more than willing to comply like any other radio station. We put in the filter which cleaned up the problem and then we went back on the air….We’ve been broadcasting ever since.

The phrase “ever since” is unfortunately is out of date. One day after Judge Wilken issued her ruling against Dunifer, Excellent Radio closed it doors, announcing it would wait for a formal change in the law before returning to the air. Now dormant, the studio still seemed somehow alive, with the accumulated stock of a few years’ activity still decorating its walls: signs, fliers, placards, notes, a Ricky Skaggs bumper sticker, posters of Malcom X and Martin Luther King, a painting of a cat, and, in the hall outside, Homer Simpson rendered either as a small statue or a large doll.

In the meantime, echoes of Excellent Radio continued to reverberate through the beaches. Mark Kent, cohost of The Surfin’ Show, had already parlayed his program into a syndicated commercial-radio gig; when Goodman stopped, Kent kept going. The former highway cop moved his jazz show to NPR. And the Excellent crew helped launch three more micro stations – now also discontinued, alas – before the mother studio turned silent, all in nearby Santa Maria. Two were churches, and one was based in a halfway house for juvenile delinquents. The kids went on the air on Friday and Saturday nights, under the house’s supervision and with the judicial authorities’ unofficial support.

These weren’t simply traces of a dormant radio station. They were the signs of transformed lives. Before Kent joined the station, he was a surfer working in his dad’s auto body shop. Now he had a fledgling career as a broadcaster. And he could still surf. Hell, he had to. It was part of his job.

He was the editor of Sound Choice Magazine and is a member of the Audio Evolution Network, an international organization dedicated to the positive evolution of music, radio and related matters. He may be contacted by mail at P.O. Box 989, Oceano, CA 93445, U.S.A.
For permission to republish this article or excerpts from it, please contact the author via the above address or in care of Excellent Radio.